No One is Winning Right Now 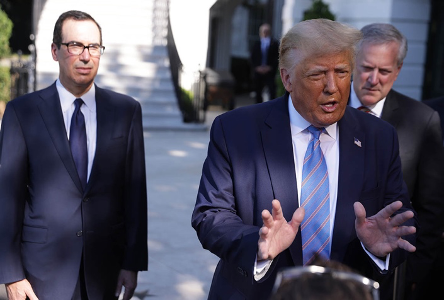 Will my unemployment be renewed?

What happens when the Paycheck Protection Program money runs out?

Why isn’t Congress doing anything?

Congress has gone home without reaching a deal with President Trump on a bill to combat the continuing fallout from the pandemic.

I try to stay away from over exaggeration in my blog posts, but the questions above are text messages I receive from concerned friends and relatives.

Americans are dying every day from the coronavirus.

30 million Americans have lost their jobs.

Unemployment payments from the Federal Government ended on July 31.

I can go on and on, but you get my point. It is infuriating that people are suffering and our government is doing nothing to help.

Now, I know Congress has passed multiple bills concerning the pandemic. I’ve reported on each bill in this blog.

And the fiscal conservative Blue Dog side of me cringes at the amount of debt and deficits in this country.

Let’s be clear about the facts here:

The House of Representatives, led by Democrats, passed a fourth COVID bill called the HEROES Act back in May.

The Senate, led by Republicans, said they were going to offer a bill and didn’t.

June went by with nothing. No bill nor offer to start negotiations from the Senate.

The Senate said they would introduce their bill by July 20. July 20 came and went.

And even then, Senate Republicans couldn’t agree on a bill, so they offered numerous piecemeal bills versus one comprehensive bill.

Twenty Republican Senators do not want a bill at all. Period. Nothing. They vowed to vote no regardless of what is in the final deal.

Let me also be clear – I am friends with Democrats, Republicans, and Trump Administration officials. I am not pointing fingers at one side. There is plenty of blame to go around on this one.

The Big Four have negotiated for the past three weeks with no results. The Democratic supported HEROES Act provided $3.5 trillion of relief. The HEALS Act, the collection of bills offered by Senate Republicans, total approximately $1 trillion.

Reportedly, the Big Four has compromised on unemployment benefits: Democrats want an extra $600 weekly included in the CARES Act. The White House offered $200. The compromise is $400.

Both sides agree to continue to provide direct payments to Americans. The amounts range from as much as $1,200 per adult and an additional amount per child or other dependent in the Democrats bill to $500 per dependent, the same amount as the CARES Act.

The impasse also continues over:

Benefits could continue through March 2021 for individuals who haven’t exhausted them by then.

Funding for the Postal Service also remains a sticking point.

In the wake of these disagreements, President Trump issues four Presidential Directives:

There are similarities between Executive Orders and Presidential Memorandums as well as key differences.

Negotiations, or lack thereof, are likely to stretch into September when the House and Senate return to Washington.

Regardless of whether you are a Republican, Democrat, or Independent, I urge you to remember what is occurring now when you vote in November.