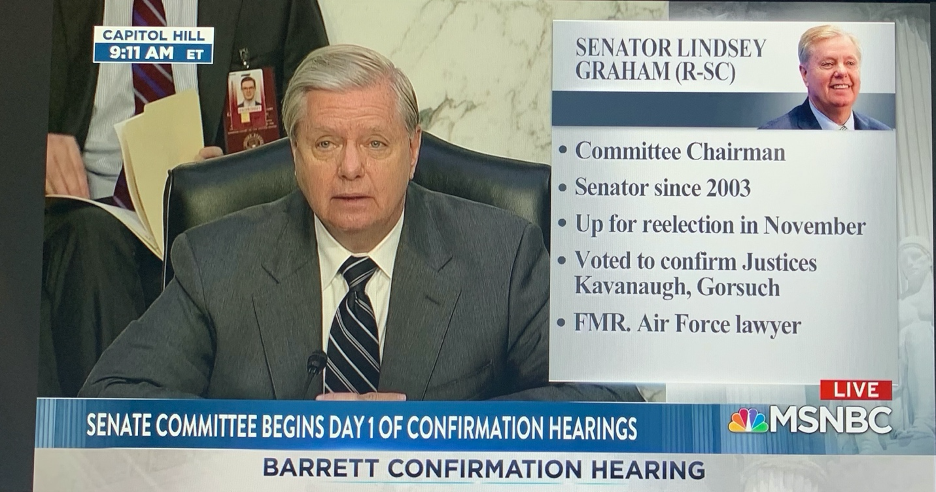 If you have read this blog over the past few weeks, then you have seen posts on:

The hearings started on Monday, just 22 days before Election Day. It is no surprise that the upcoming election was a dominant theme in this week’s proceedings.

Likewise, regardless of your party, the nomination and assumed confirmation of Judge Amy Coney Barrett will cement a conservative majority on the Court for decades to come.

Before we jump into what has occurred this week, just a reminder of who are the twenty-two (22) Members of the Senate Judiciary Committee presiding over this week’s hearings:

Today is day four of the confirmation hearing process. My key takeaways from each day’s hearings are as follows:

To no surprise, Republican Senators’ opening statements focused on Judge Amy Coney Barrett’s strong qualifications to be on the Court, her historic nomination replacing the late Justice Ruth Bader Ginsburg, and her record as a jurist on the Seventh Circuit Court of Appeals as well as a law professor.

Democrat Senators’ opening statements focused on the McConnell Rule from March 2016 when he denied considering President Obama’s Supreme Court Nominee Merrick Garland – “The American people should have a voice in the selection of their next Supreme Court Justice. Therefore, this vacancy should not be filled until we have a new President.”  This rule has been cited over and over during this week’s hearings.

The nominee explained she is an originalist in the model of late Supreme Court Justice Antonin Scalia, for whom she served as a law clerk in 1990s.

Perhaps the most notable occurrence on day one was the in-person attendance of Senator Mike Lee who tested positive for coronavirus after the September 26 Rose Garden ceremony.  This attendance grabbed my attention because two other Senators, Thom Tillis and Ted Cruz, remain in quarantine participating in the hearing virtually.

Chairman Graham denied Democrats request for daily coronavirus testing for Members of the Committee given the coronavirus outbreak in the Senate.

Day two allows for Senators to engage in question and answers with the nominee. Each Senator questions the nominee for 30 minutes resulting in an 11-hour hearing.

Granted, the confirmation hearings for now Associate Justice Brett Kavanaugh were not substantive legal exchanges either but that is a whole other subject.

Similarly, Judge Barrett was asked about President Trump’s statements regarding a peaceful transfer of power after the election. She was also asked if the President can move election day.

Even though these questions were asked by Democrats, they are softball, easy homerun questions in my opinion.

Yesterday, all three Senators who were in quarantine attended the hearings in person.

All three said their doctors approved of their appearance.

That just makes me nervous for everyone in that enclosed windowless hearing room, but I digress…

The Affordable Care Act, election questions, gun rights and the Second Amendment, voting rights, and even questions about climate change were posed to the nominee.

The lawyer in me just smiles at Senator Mike Lee’s questions and comments about the dormant Commerce Clause.

It bears repeating that this week’s hearings have been the exact opposite of the Brett Kavanaugh hearings. The exchanges are respectful even when there are substantive disagreements, no interrupting, no yelling…and no mention of beer drinking.

This morning began with Sen. Blumenthal making a motion to adjourn the hearings.

Senators from each side argued their views about the process.  The arguments back and forth can be summed up in two ways:

To Chairman Graham’s credit, he allowed every Senator to speak (some spoke twice) their mind which lasted two hours.

Then the hearing commenced with questions and answers from the panel of witnesses:

Chairman Graham has set the confirmation vote for October 22.

Barring any unforeseen circumstances, Judge Amy Coney Barrett will receive a majority vote in the Judiciary Committee and her nomination will be sent to the full Senate for a vote.