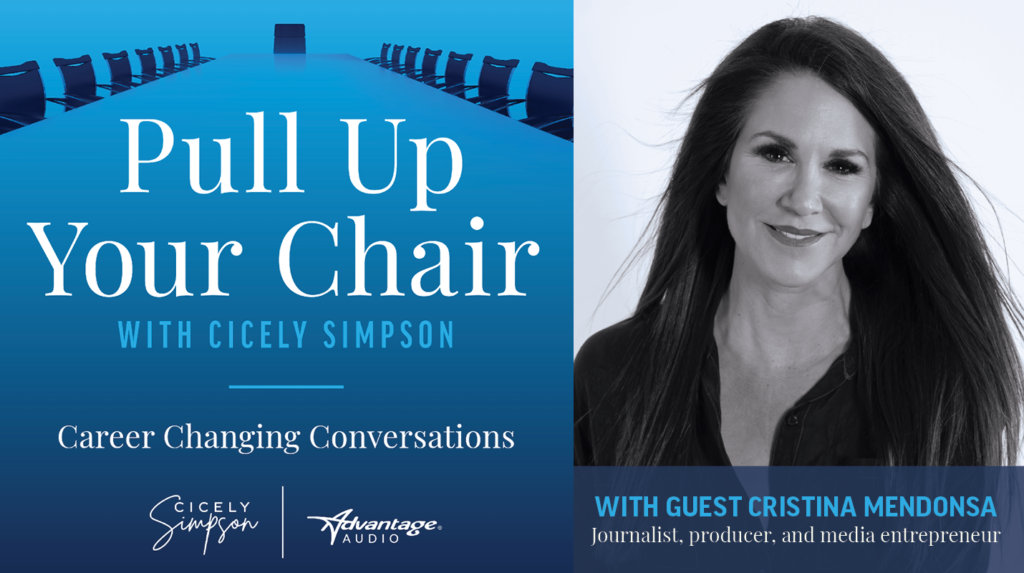 Cicely welcomes Cristina Mendonsa to Pull Up Your Chair. Christina anchors 4 hours of radio news daily while also producing documentaries, winning awards, and mentoring upcoming journalists on career strategy and mid-career pivots. In part one, Cristina talks about her first job in journalism, the evolution of electronic media, and what inspired her to shift from television to radio.

About Cristina Mendonsa: Cristina is an EMMY/Edward R. Murrow award-winning multimedia journalist, producer, spokesperson and media entrepreneur. For over two decades, she’s demonstrated her passion for telling stories with impact and heart by crafting relevant, targeted content for nationwide media groups and broadcast networks in the United States.

Cristina has reported and anchored for ABC, CBS, and NBC television stations throughout the United States and recently joined the nationwide iHeartMedia group where she anchors and reports for KFBK, the group’s number one Newsradio station. Her reputation for combining a direct approach with a warm interview style has allowed her to secure interviews with presidents and prime ministers as well as other top newsmakers for 25 years and gain the trust of her viewers and listeners. As a media entrepreneur, she is the creator of the Power Profile which is a podcast and video series of innovators, entrepreneurs and thought leaders. Her academic pursuits include a master’s degree in communications and leadership as well as a bachelors degrees in Political Science and Journalism. Cristina conducted a national media research study on broadcast journalist work habits in 2015 which is cited and quoted in global projects on media.

A wine enthusiast, Cristina loves to explore appellations throughout the US and around the world. She is also an avid home exchanger and an expert in this niche travel method having completed dozens of exchanges over the last decade. Cristina and her husband, author/educator, Jonathan Robinette, live in Northern California.