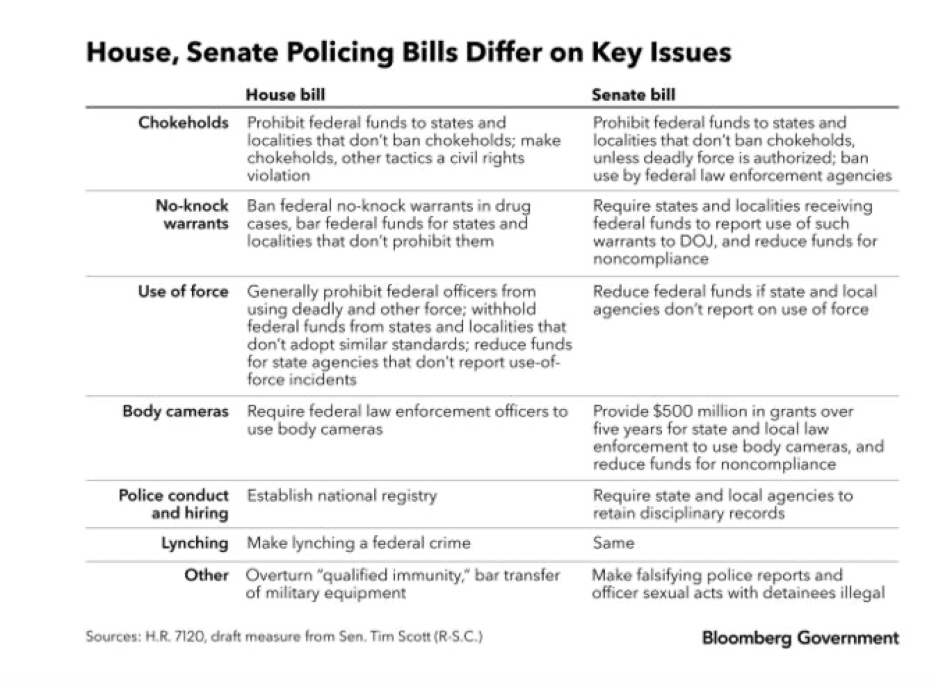 It has been one month since the death of George Floyd.

Those demands are leading to a crossroads in Congress.

Senate Democrats are struggling over how to respond to the Senate Republicans’ police reform proposal, The JUSTICE Act.

Their legislative choices are to block the bill they say doesn’t go far enough OR pass a bill that needs significant changes in their opinion.

This is also a political calculation: pass a bill that you don’t agree with just to get something done and hope a potential Biden Presidency will do or do nothing, blame Republicans for a weak response, and hope for a Biden Presidency to make meaningful reforms.

Senate Democrats are wary of their options, particularly in an election year where the party’s base is eager for action.

Senators Kamala Harris (D-CA) and Cory Booker (D-NJ) along with House Democrats seek strong federal reforms, while Senator Tim Scott (R-SC) and Senate Republicans seek to encourage states and cities to decrease use of force and stamp out misconduct.

According to Bloomberg Government, Senators Harris and Booker said the GOP’s bill falls short because it doesn’t allow consequences for bad-acting police officers and doesn’t ban no-knock raids, among other things. Harris said Scott’s proposal “does not meet the moment, his bill would literally not save a life. This bill is highly problematic and won’t save lives. Our bill will,” Booker said. “It wouldn’t prevent Breonna Taylor from dying. It wouldn’t prevent people from being shot by police. It won’t change the culture.”

The reason these decisions are so pivotal is because Senate rules require 60 votes to proceed to the legislation. Thus, Senate Republicans need at least seven Democrats to join them. Meanwhile, House Democrats can pass their legislation on a simple majority.

After days of agonizing over their strategy, Senate Democrats blocked Senate Republicans’ bill, The JUSTICE Act, on a 55-45 procedural vote to move the bill to the Senate floor for debate.

President Trump accused Democrats of voting down the Senate police reform bill because they want to weaken police.

Meanwhile on the other side of the Capitol, the House passed the George Floyd Justice in Policing Act by a vote of 236-181. Three Republicans joined all Democrats in voting yes on the bill: Reps. Brian Fitzpatrick (Pa.), Will Hurd (Texas) and Fred Upton (Mich.).

“This is the day we pass legislation to transform policing in America,” said Rep. Karen Bass (D-Calif.), chairwoman of the Congressional Black Caucus and author of the police measure. “We are supposed to be the beacon of hope for human rights in other countries—and the Justice in Policing Act is a bill for human rights in our country.”

The Republican-controlled Senate will not consider the now passed House Democrats bill.

Democrats held out a glimmer of hope that passage by the House would force negotiations with Senate Republicans, but that is not going to happen.

The stalemate in Congress will likely continue and nothing will happen until after the November elections.