Members Named to House Select Committee on the Coronavirus Crisis 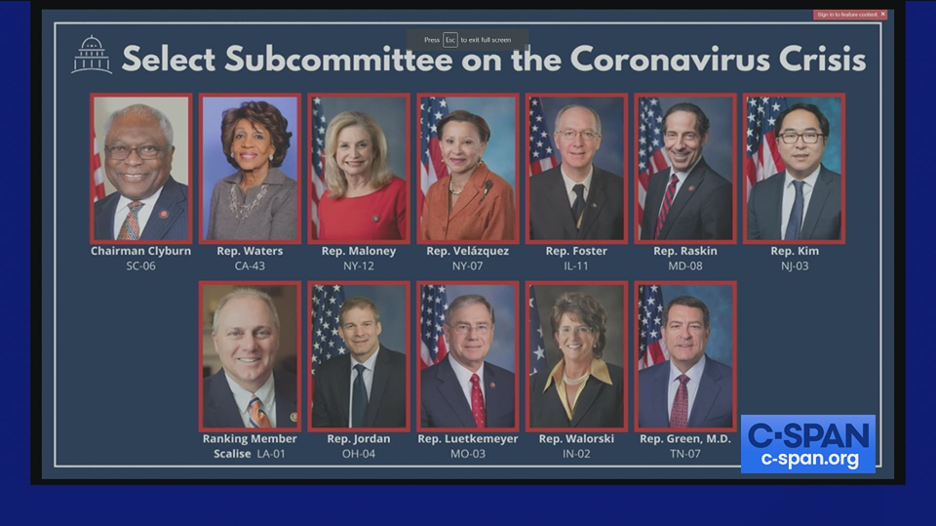 How many Committees are in the House of Representatives?

Spoiler Alert: there are 24 Committees in the House, most of which have Subcommittees as well.

The CARES Act, signed into law in March, created a House Committee to provide the oversight of the government’s response to COVID-19, including programs and funding provided by Congress to combat the virus.

Speaker of the House Nancy Pelosi (CA) appointed the following Committee and Subcommittee Chairs to the Committee:

“The House Select Committee on the Coronavirus Crisis, established by the CARES Act, is a special bipartisan oversight panel empowered to examine all aspects of the federal response to the coronavirus to ensure that taxpayer dollars are being wisely and efficiently. Modeled after the Truman Committee that saved lives and billions of taxpayer dollars by preventing waste, fraud and abuse during World War II, this panel will protect against price gouging and profiteering and ensure the federal coronavirus response is based on the best possible science and guided by our nation’s leading health experts.”

For context, Leader McCarthy moved Congressman Jim Jordan to the Intelligence Committee when the impeachment process began and served as one of President Trump’s most ardent supporters during impeachment. Congressman Jordan currently serves as the Ranking Member of the Judiciary Committee and the Oversight and Reform Committee.

Congressman Mark Green is also a staunch supporter of the President. President Trump nominated Mark Green to be Secretary of the Army, but Mark Green subsequently withdrew his candidacy. Congressman Green then ran for Congress winning Marsha Blackburn’s the Congressional seat that she vacated to run for Senate.

Likewise, Congressman Luetkemeyer has been critical of Speaker’s Pelosi lack of focus on holding China accountable for the virus and has said this Committee is a way to help Joe Biden.

Congresswoman Walorski has also made comments about China stating, “We should focus on holding China accountable for hiding the truth about the coronavirus outbreak, ensuring the success of unprecedented relief efforts, and providing clear guidance on how to safely and responsibly restart our economy.”

When announcing these five members in a press release, Leader McCarthy stated the following:

Oversight Committee — led by one of the most political members of their caucus.

“I have frequently gone over the existing oversight functions in the House: The Oversight Committee, oversight authority within each committee, and three additional, new oversight bodies established from the CARES Act.

“But what concerns me more than the redundancy and waste of taxpayer resources, is the partisan roster the Speaker has selected to take part in this committee. Jim Clyburn has described this pandemic as a “tremendous opportunity to restructure things to fit our vision.” Maxine Waters in 2017 said “I’m going to keep working until he’s impeached.” And Jamie Raskin who called for the president’s impeachment days before his inauguration.

“While the Democrats might use this to take another stab at Impeachment 2.0 — Republicans remain committed to truth and transparency. That is why I have asked our Whip, Steve Scalise, to lead this panel for us. In addition to our Whip, the panel will include Representatives Mark Green, Jim Jordan, Blaine Luetkemeyer, and Jackie Walorski.

“Despite the Democrats’ intentions, I know these members will honorably serve the American people in making sure this does not turn into another baseless, partisan pursuit.”