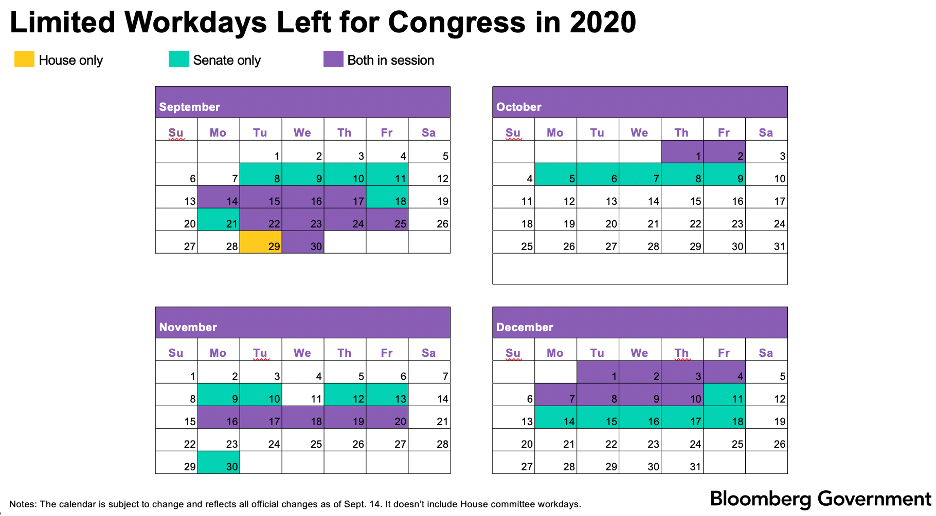 Do you know how many days until Election Day?

Granted, in pandemic time, it seems like every day is Groundhog Day, living the same day and same routine over and over and over (insert as many “overs” as you need here).

In election years, September signals the 60-day sprint to November.

In election years, Congress typically adjourns in October so that Members can campaign back home.

Congress will reconvene in November after the Election for what is called a “Lame Duck” session of Congress. (I’ll explain more about Lame Duck in another post).

According to the Congressional Calendar provided by Bloomberg Government, the Senate returned to Washington September 8 – October 9. The House returns September 14 – October 2.

The list of things of “must-pass” items in the voting days in September is long and includes the following:

Any of these “must-pass” pieces of legislation are a significant effort.

When taken together, the question becomes what gets included in the bill to fund the government to prevent a shutdown and what programs will be allowed to expire.

Let’s look at a few of these bills:

I’ll provide more information on the next COVID bill once the House and Senate return to Washington. For now, the important thing to know is that the COVID bill and Government Funding become competing priorities for what needs to pass in September.

Should the two bills be combined? Is that even possible?

How do you decide which is more important?

Yes, it is possible to combine the two bills into one legislative package. Given the impasse that existed since May on a fourth COVID bill, combining the two bills has been taken off the table.

The government has to be funded by September 30 to prevent another government shutdown.

Recognizing the choice, Speaker of the House Nancy Pelosi (D-CA) and Treasury Secretary Steve Mnuchin have agreed the priority is to fund the government before the September 30 deadline.

I don’t want to get too wonky here, but this is important, especially you have ever wondered why the federal government shutdowns or if a shutdown has impacted your job.

Each year, Congress faces a September 30 deadline to pass legislation to pay for the government through the next fiscal year.

According to a 2018 analysis by Fivethirtyeight.com, Congress has failed to pass the annual 12 bills to fund the government by that deadline. Even though that analysis is dated 2018, the same was true in 2019 and now in 2020.

The government cannot operate without funding, so a government shutdown will occur.

To avoid a government shutdown at midnight on September 30, Congress often passes a stopgap bill called a “continuing resolution” (known as a CR).

A continuing resolution funds the government temporarily until Congress can negotiate a longer-term deal.

Speaker Pelosi and Secretary Mnuchin have agreed to negotiate a deal to fund the government, so their negotiations take priority over other programs that may expire.

Likewise, programs that expire on September 30 (Flood Insurance Program and Highway funding) can be temporarily funded in the government funding bill since they are federal government programs.

When it comes to passing a CR, Congress can pass a bill to fund the government until December which gets them past the election. December action could also force action on the pending COVD negotiations meaning Congress would pass one funding bill to address both topics.

Alternatively, depending on who wins the election, Congress could fund the government until February and punt all decisions until a new Congress begins in 2021. That way, the party wins loses the election will dictate funding priorities.

The details are still being developed.

The Clock is Ticking

In Washington, the saying is the smell of jet fumes from the airplanes will make lawmakers act quickly because they want to get home as soon as possible.

The closer we get to October, which is 30 days from Election Day, lawmakers are anxious to finish their work in Washington to focus on their campaigns back home.

What happens to the other programs and items that don’t get passed before September 30?

Congress kicks the can down the road and will handle those programs and other must-pass items after the Election.

Hence the sprint to Election Day and the need for a Lame Duck session of Congress after each Election.

20 Days until the federal government runs out of money.